Welcome to the new royal baby, Prince George.  The Duchess of Cambridge has good reason to be grateful for giving birth in the 21st century.  Childbirth in the past was potentially very dangerous to both mother and baby.   The Faculty of Physicians and Surgeons of Glasgow was only too aware of the dangers and, in 1740, implemented a system of examination and licensing for midwives.  This was unique and unparalleled in the rest of Britain.  Between 1740 and 1826, 276 midwives in all were licensed.  Those who practised without a licence within the Faculty’s bounds of jurisdicition (Lanark, Ayr, Renfrew and Dunbarton) or who failed the examination were ordered to desist until they were examined (or re-examined) and were fined if they did not do so. There is no record of the questions asked and the Faculty itself did not provide any instruction.   Although courses for midwifery were advertised in the Glasgow newspapers from 1757 onwards, midwives traditionally learned by serving an informal apprenticeship to an established practitioner.  They may have studied works such as A Treatise on the Art of Midwifery by Mrs Elizabeth Nihell, published in 1760 or Nicholas Culpeper’s Compleat and Experienced Midwife.  Both works are available in the College library.  Nihell firmly believed in female midwives over male practitioners, whom she saw as too ready to intervene, notably with forceps.  Women, Nihell argued, had a much better touch: “the hand of a true midwife will … beat the most scientific head of a man-practitioner, though stuffed never so full with Greek and Latin” (Nihell, p.315). 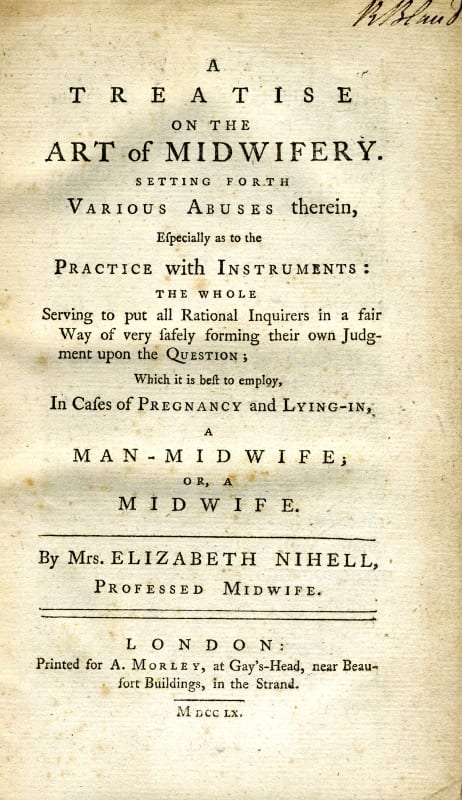 A treatise on the art of midwifery by Elizabeth Nihell, 1760

By 1820, midwives viewed the lecture courses available in Glasgow as an alternative to the Faculty’s licensing examination and numbers taking the examination began to decrease significantly, the Faculty not being able to enforce its licensing procedure.    The last licence for midwifery was issued in 1826.  An attempt was made by the Faculty in February 1834 to reverse this situation by stating that midwives should take the same oath as the male licentiates, thereby ‘distinguish[ing] more completely … between the Facultys licence And a simple certificate of qualification by one of the Lecturers on Midwifery on which it is presumed most midwives found their title to practise’ (College Minutes, 1834).  The licence was not to be revived, however, and in  December 1834, further competition appeared in the opening of the Glasgow Lying-in Hospital and Dispensary  which offered practical training in midwifery to female pupils.  The lack of a formal licensing procedure from the early 19th century onwards  meant that, until the passage of the Midwives (Scotland) Act in 1915, there was nothing stopping women practising as midwives without training or qualifications.

Further information about the Faculty’s involvement in licensing midwives can be found in an article by Dr Anne Cameron, “A unique source for the history of midwifery in Scotland: the Minutes of the Faculty of Physicians and Surgeons of Glasgow, Scottish Archives, 2005 (11) 37-46.