Sir Joseph Lister’s impact on the field of surgery was monumentous, applying the germ theory to humans and solving the mystery of why wounds so often got infected. By dabbing wounds with carbolic acid, as well as dressing the wounds in acid-dipped lint, Lister was able to stop the putrification of wounds and sepsis altogether. Today, it is easy to see how revolutionary his work was. However, Lister’s findings were not as well received at the time as one might think.

As soon as he published his initial papers on antisepsis in The Lancet in 1867, Lister received vast amounts of criticism from distinguished surgeons around the world. Despite having support from his colleagues and students, the number of people opposed outweighed them all. With all this opposition, it seemed almost impossible that Listerism would catch on [1]. But catch on it did, and this was in part due to the few individuals bold enough to stand up for Lister and employ his practices in antisepsis. One such man was that of William Halsted, one of the greatest American surgeons of all time.

After graduating, Halsted became the house physician at the New York City Hospital, where after a year he travelled to Europe to study the practises of European surgery. Upon returning from his European travels, Halsted began to implement the practice of safe surgery in New York City. His regime was built upon the three pillars of surgery; anaesthesia to relieve pain, the prevention of haemorrhaging, and antisepsis to prevent wound infections. The latter, as we know, was introduced and pioneered by Sir Joseph Lister as a surgeon at the Glasgow Royal Infirmary.

Halsted copied Lister’s use of carbolic acid as a disinfectant not only to sterilise wounds, but also his surgical instruments. The downfall of using carbolic acid in antisepsis was its hazardous chemical properties. Although it was an effective antiseptic, carbolic acid was also corrosive and toxic. This meant that severe damage could be done to an individual from over-exposure. One example was that of Mr. Halsted’s wife, Caroline, who happened to be his chief nurse in the operating room [2]. In 1889, Caroline contracted severe contact dermatitis from using carbolic acid in the operating theatre. This condition is characterised by the formation of a rash alongside blisters. To overcome this issue, Halsted suggested that his wife wear rubber gloves in theatre to avoid skin contact with the carbolic acid. Not only did this move prevent Caroline’s dermatitis from worsening, but it also improved Lister’s antiseptic technique. This is the first known documented use of rubber gloves in surgery.

Why all this talk about William Halsted? Not only was he an advocate of antisepsis, but he was also a keen scientist, and introduced several new operations into the field. With these new operations were introduced adaptations of popular medical instruments, such as the artery forceps (haemostats). Artery forceps are essentially clips that are used to temporarily clamp blood vessels and arrest the flow of blood. Halsted designed his own form of artery forceps, known as the “Halsted Mosquito Forceps”, an example of which is held within the College’s museum collection: 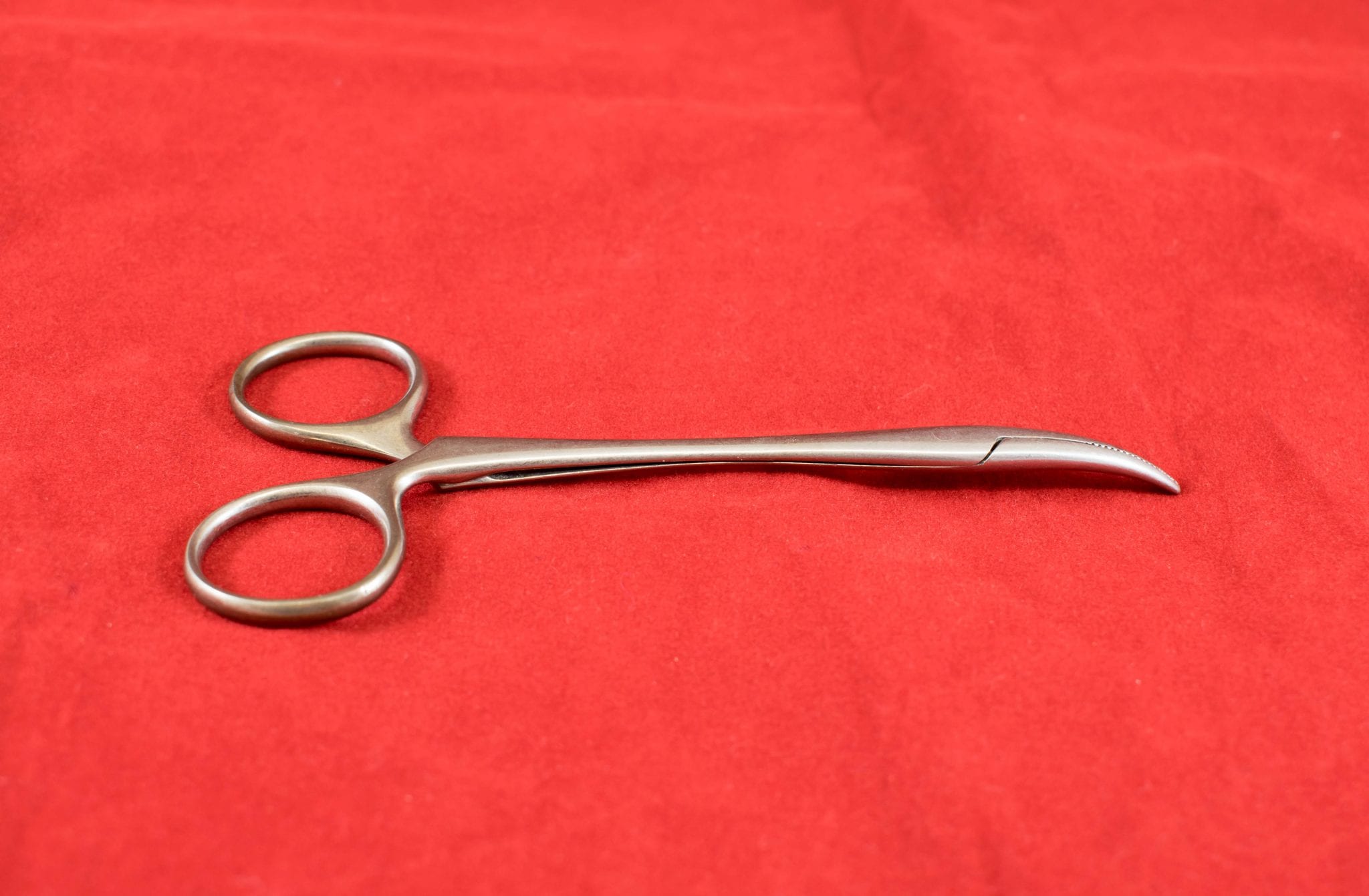 This haemotstat is ratchetted and would have been used to block small blood vessels during an operation. The teeth of the handle allow the haemostat to be locked in place, meaning that the haemostat can clamp the vessel and stand alone, instead of having to be held for the entire operation. Halsted mentions in one of his publications that his instruments were immersed in carbolic acid to keep them sterile, and that the operator handling the instruments would have worn gloves to prevent the spread of infection [3]. Throughout his published works he reiterates the importance of Lister’s antiseptic technique and the part it plays in the practice of safe surgery.

It may have taken some convincing, but Lister’s findings on antisepsis proved to be true and not only impacted America, but the world.