The Curious Case of Mr. Tipple

Held within the College’s archive collection are a variety of patient case documents, ranging from the common to the peculiar. Practitioners often documented their cases for future reference or publication purposes.

One such publication within the archives that is particularly interesting is “An Account of a Case of Recovery: After the shaft of a chaise had been forced through the thorax”. 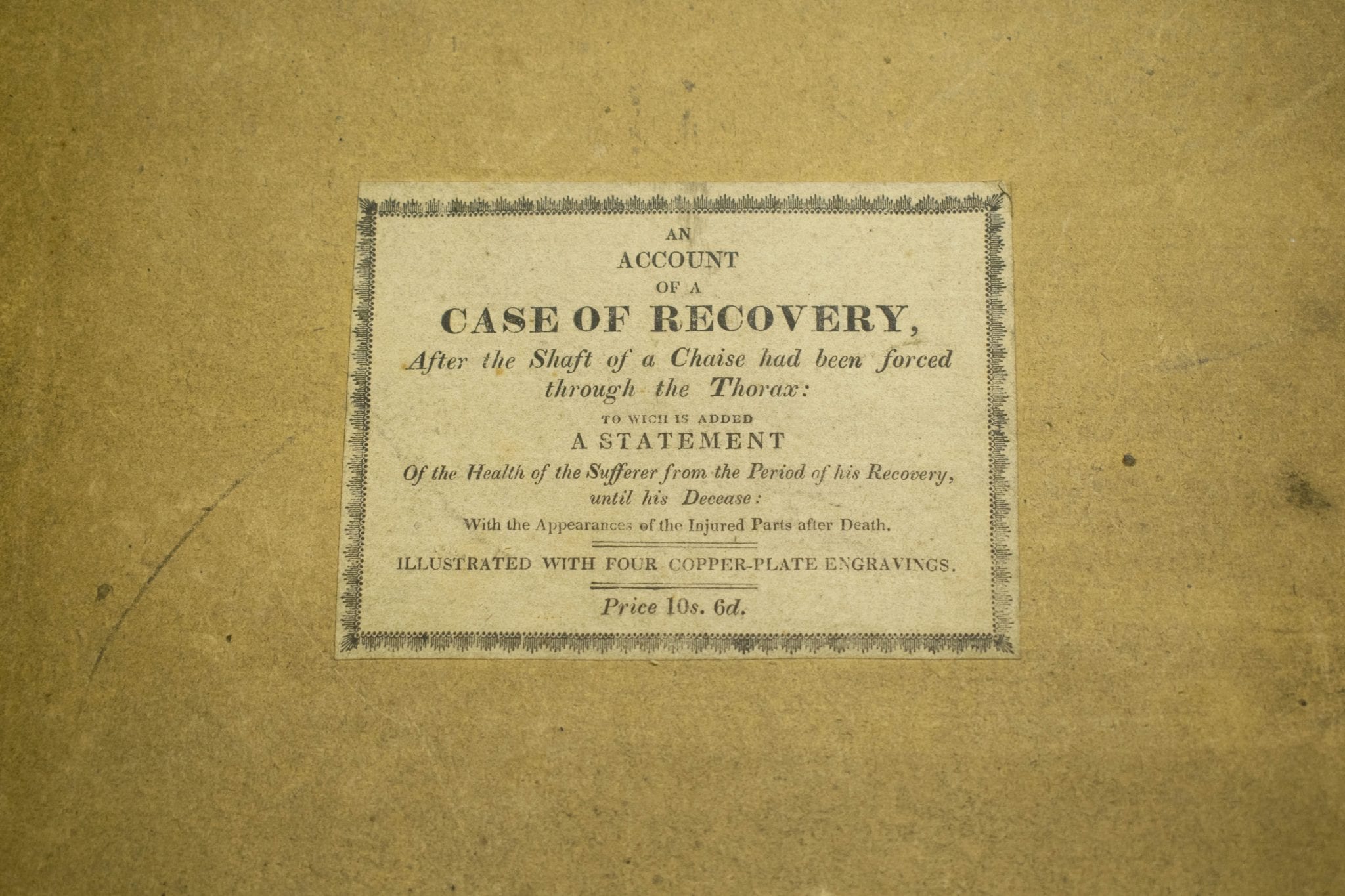 This book gives an account of a Mr. Tipple, who in 1812 was in a life-threatening accident where a metal shaft perforated his thorax and pinned him to the wall of a building. What makes this case more fascinating is the fact that he survived the accident! Flicking through the book the reader can find the account of the accident, Dr. Maiden’s examination notes, and the results of the post-mortem taken upon Mr. Tipple’s death in 1822.

The first statement within this book is that of Mr.Tipple, who gives an account of the events that led to his injury. He was arriving at the house of his friend at which point the horse pulling his cart became irritable. Trying to calm the horse, Mr. Tipple began to dissemble the cart: 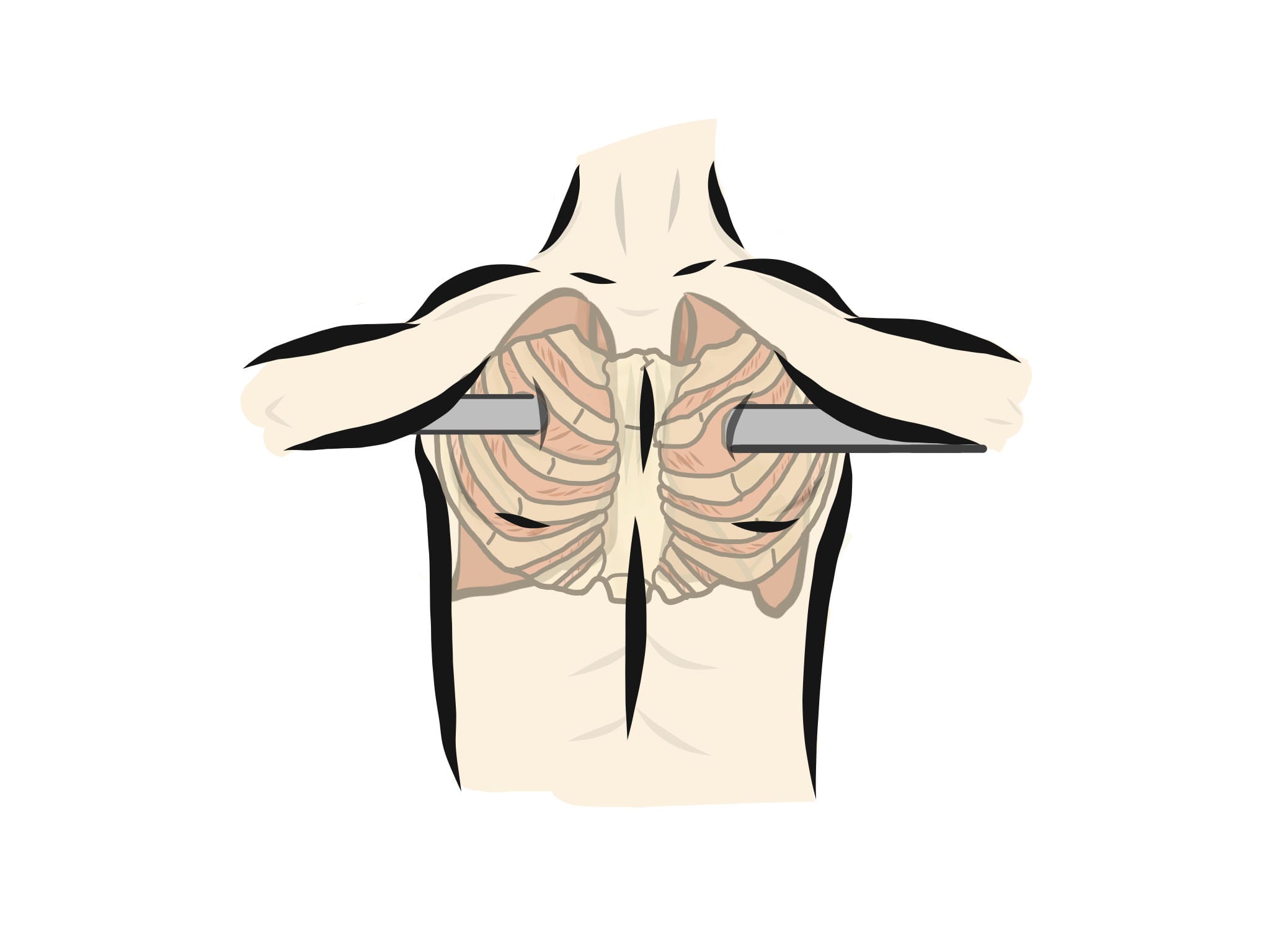 Interpretation of how the shaft penetrated Mr. Tipple’s chest.

The shaft of the chaise had passed all the way through Mr. Tipple’s chest, exiting at about the level of his right arm pit. Witness accounts of the accident state that he was slightly suspended off the ground by the shaft, standing on his toes to relieve some of the pressure in his chest. 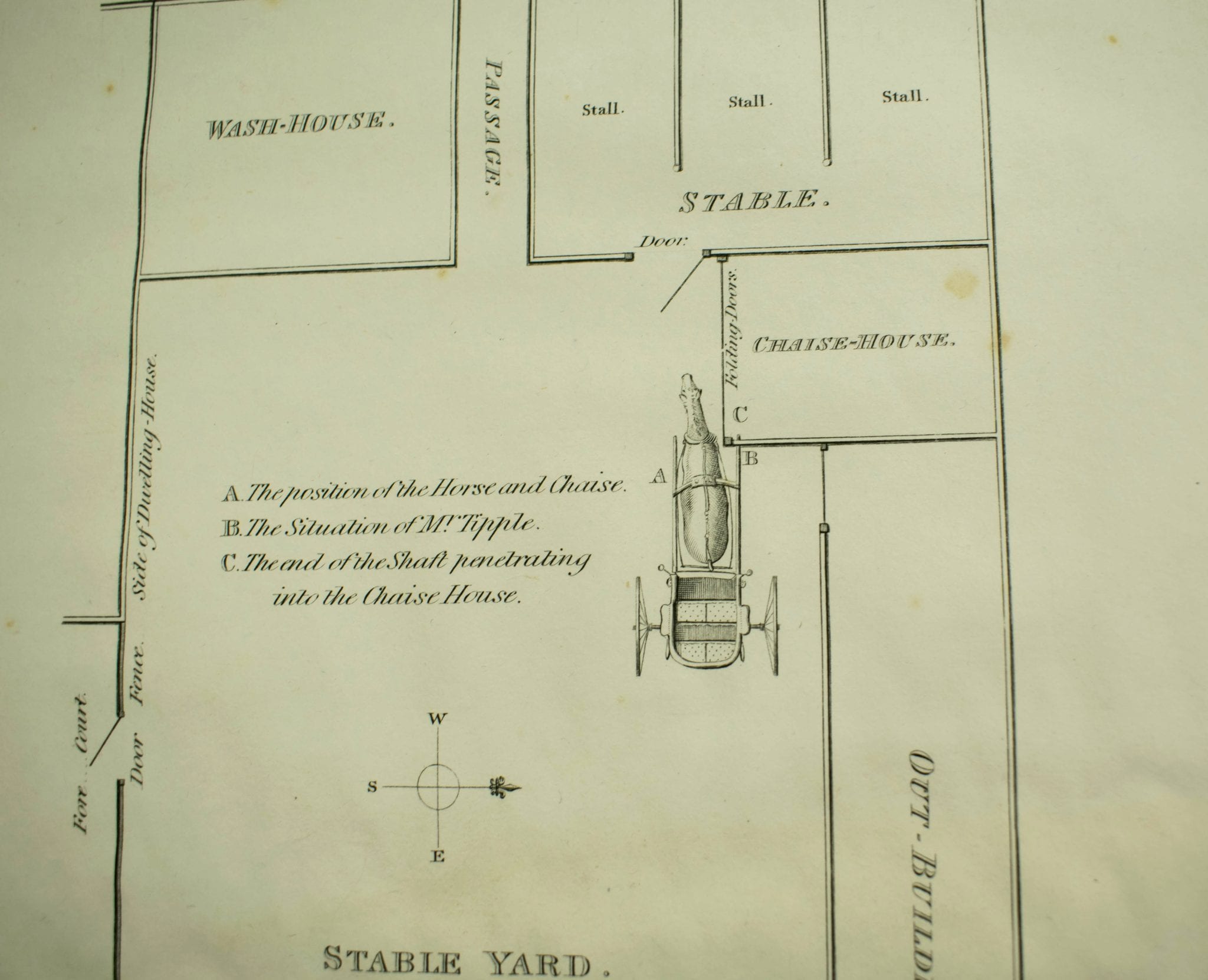 Illustration showing the site of the accident. A) The position of the horse and chaise. B) The situation of Mr. Tipple. C) The end of the shaft penetrating into the chaise house.

Once the shaft was removed, Mr. Tipple entered the house and retired to the guest bedroom, where he removed his shirt and lay back slightly on the bed. It was at this point that he experienced periods of dyspnoea (difficulty breathing) and began to feel faint. The doctor arrived 10 minutes after the accident occurred, and on examining the wounds found there to be an escape of air-filled blood.

In attempt to relieve his difficulty in breathing, doctors frequently drained blood from his body and did so by opening a vein in his right arm. This procedure gave Mr. Tipple immediate rest and his breathing would return to normal. (At this time in history, bloodletting was the go to procedure for a variety of ailments, but in this case it was done to reduce internal haemorrhaging in the chest. The practice of draining the chest via a chest tube was not made popular until the 1950s, which could be why Dr. Maiden let blood from the arm instead). 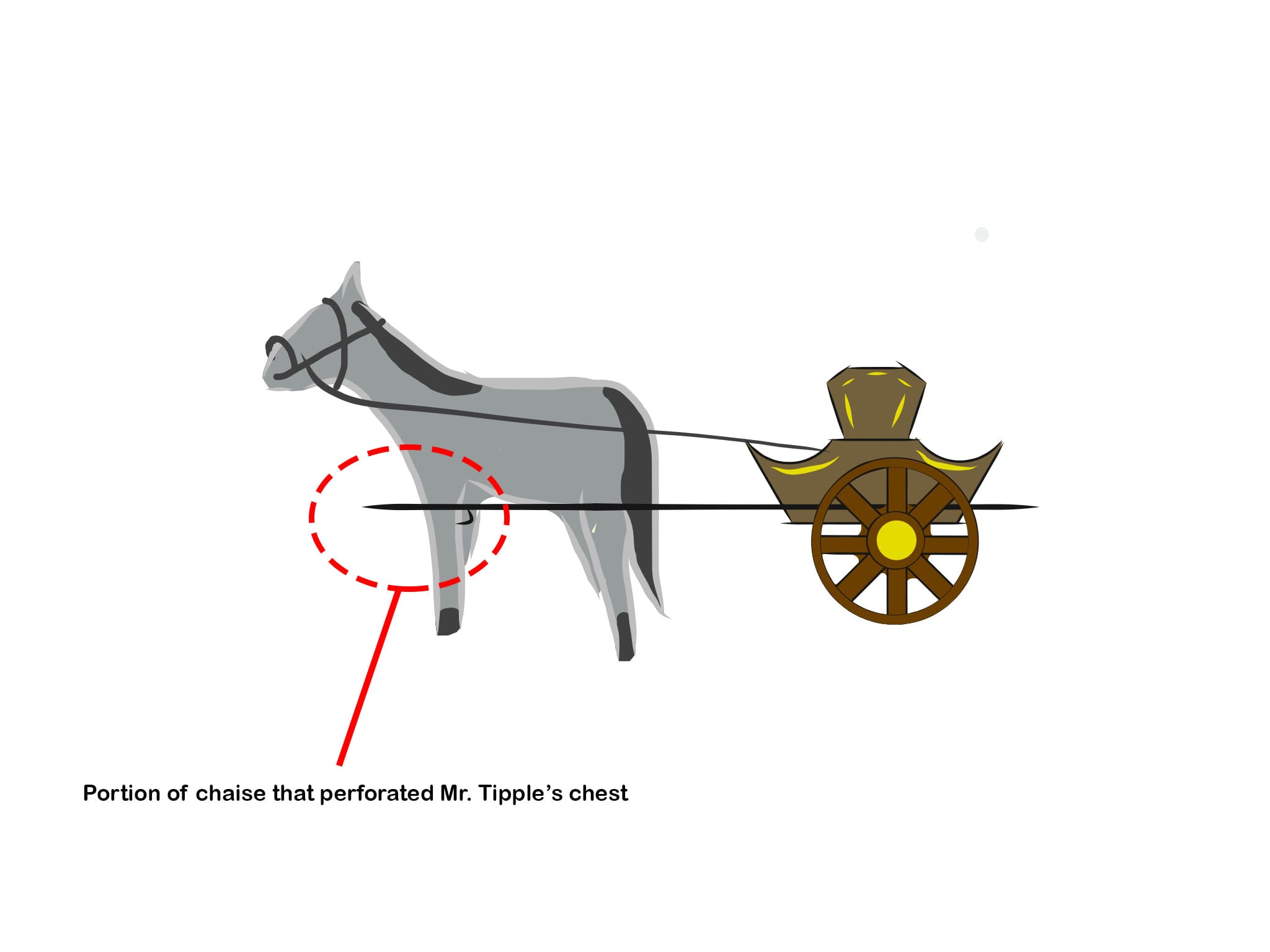 Illustration showing the portion of the chaise that pierced Mr. Tipple’s side.

For weeks the situation was the same; Mr. Tipple would experience bouts of dyspnoea and his blood would be drained to relieve the pressure. This continued for the rest of his life, along with periods of cardiac arrhythmia, which ended 10 years after the accident, in 1823.

On examination of the body during the post-mortem, it was visible that the shaft had entered the thoracic cavity between the second and third ribs through the second intercostal space, and exiting on the right hand side via the second intercostal space. The holes in the intercostal muscles created by the shaft had been closed over by a clear membranous tissue to which the lungs adhered. This was most likely scar tissue. The lungs themselves were intact and had not been punctured by the shaft because of its blunt end. The blunt end would not have been sharp enough to actually damage the lung tissue, which would have simply been pushed out of the way. Mr. Tipple’s heart was also untouched by the shaft; however there was some hypertrophy in the region of the right ventricle. This would suggest that Mr.Tipple’s death was a result of heart failure caused by a fibrosis of the lungs. This fibrosis (scarring and stiffening) of the lungs would have been a result of trauma from the accident ten years before. The breathlessness that he experienced after the accident was due to a pneumothorax induced by the sucking chest wound from the shaft penetration.

A curious case indeed, it is a mystery how Mr. Tipple not only survived the trauma, but also the volume of blood that was drained from his body during treatment. Although such an accident could easily recur, (maybe not in the exact same circumstances), healthcare today is much more advanced and more than capable to properly diagnose and treat such cases.

For more details about Mr. Tipple’s case and the above document, feel free to contact us at: library@rcpsg.ac.uk

Many thanks to doctors-in-training, Jenny Crabbe and Rosie Jacks, for their expertise and guidance on this patient case.