Childbirth has always been considered a miraculous event. Bringing a new life safely into this world is always a momentous occasion and victory. The health of both mother and child is of utmost importance to those involved in maternity health, and the practice as we know it today is the safest it has ever been in history.

However, there was a time when childbirth was considered a death sentence for the expectant mother [1], and maternity healthcare was based on class, on where the mother ranked in the public hierarchy. Not only was the likelihood of the mother dying during childbirth much higher than it is today, the life expectancy of the child was much shorter, although this varied depending on where the child was brought up. Yes, the process of childbirth has changed tremendously in the past 200 years and this change has been brought about by those fighting for better maternity healthcare.

One man that vastly improved the survival rate of mothers was Ignaz Semmelweis, an unsung hero of antisepsis. Working as an obstetrician at the Vienna General Hospital in 1846, Semmelweis noticed a difference in mortality rates between the two maternity clinics there. Where the clinic run by midwives had a mortality rate of around 4%, 10% of mothers died after giving birth in the clinic run by teaching staff of the University of Vienna [2]. These mothers were dying of a condition known as “childbed fever”.

Semmelweis took it upon himself to solve this mystery. The difference between clinics, he discovered, was in hygiene- the medical students would attend their patients straight after performing autopsies and would not have washed their hands or clothes efficiently in between sessions. This meant that the wounds and reproductive tracts of the recovering mothers were being contaminated, resulting in childbed fever and ultimately death.  The concept of contamination was not yet understood at this time in history, thus explaining Semmelweis’ difficulty in identifying the root of the problem.

When Semmelweis discovered this, he put in place the practice of handwashing with chlorinated lime in both clinics in 1847. Obstetricians were to wash their hands before and after examining patients in the first clinic, as well as the midwives in the second clinic. With this change in hygiene, the mortality rate of the first clinic dropped to around 1% within two months. However, Semmelweis was not recognised for his astounding work due to his unpopularity in the research field. The lack of belief from his contemporaries drove him insane, which resulted in his admittance to a mental institution in 1867. Semmelweis sadly died of blood poisoning, from the contamination of a wound caused by the institution staff [3]. It has only been after his death that his work has been recognised and praised.  His work paved the way for Lister’s contribution to antiseptic practices in medicine.

Another name often associated with maternity healthcare is Lucy Baldwin. Lucy Baldwin, Countess Baldwin of Bewdley, was the wife of Stanley Baldwin, the prime minister of the United Kingdom from 1923-1924, 1924-1929, and 1935-1937. Although some may remember Countess Baldwin as a Prime Minister’s wife, Baldwin was an active writer and campaigner for equal maternity health care for all women. Having six children of her own, Baldwin was all too aware of the importance of maternal care during and after childbirth.

In the early 1900s, the rate of maternal deaths was incredibly high and little was being done to reverse the statistics [4]. Baldwin supported the work of the National Birthday Trust Fund to improve the care of pregnant women, and had an important role in obtaining equal access to anaesthesia for all mothers regardless of their financial income. Her great efforts lead to the introduction of self-administered anaesthetic machines into many hospitals across the country [5]. She had close ties with maternity health in Glasgow, having opened a New Infant Health Visitors Association centre in Bridgeton, and paved the way for the employment of the first anaesthetists at the Glasgow Royal Maternity Hospital in 1930 [6]. Named after her in her honour, a Lucy Baldwin Gas-Oxygen Analgesia Apparatus can be found with the College’s museum collection, [Fig 1]. 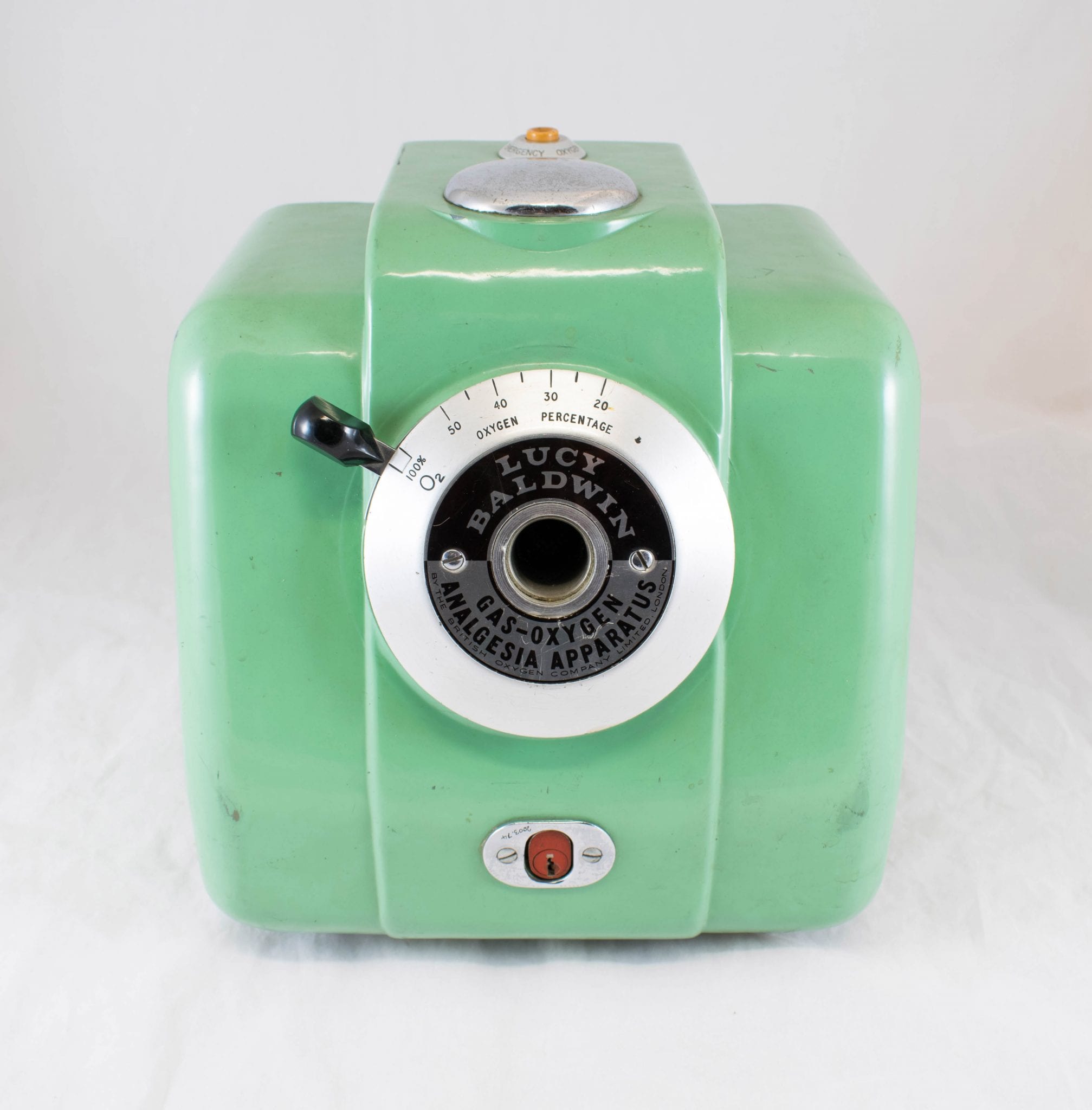 The apparatus would include a face mask, which was connected to the machine through a tube. The midwife could then manipulate the dial to alter the percentage of oxygen within the gaseous mixture. The machine would be mounted onto 4 wheels for easy movement between patient beds.

Although Baldwin was not medically trained herself, she used her position and the resources available to her to fight for equal rights in healthcare.

For more information on the Lucy Baldwin Gas-Oxygen Analgesia Apparatus, feel free to contact us at: library@rcpsg.ac.uk