One of the themes for this year’s Doors Open Day Festival in Glasgow is industrial heritage.  The College museum collection contains many items relating to surgical instrument makers during the 19th century and several of these items are on display in the College’s Crush Hall until the end of September.

Designated surgical instrument makers appear in Glasgow from around the beginning of the 19th century. W.A. Norie, for example is known to have been established at Hutcheson Street, Glasgow, by 1801. The rise in instrument makers coincides with the growth of Glasgow as a large industrial city and the establishment of hospitals, clinics and surgeries to care for the growing population. Glasgow Royal Infirmary opened its doors to patients in 1794 and remained the main city hospital until the second half of the 19th century; the Western Infirmary opening in 1874 and the Southern General in 1890. The variety of instruments manufactured by the Glasgow makers demonstrate the great advance in surgical techniques that occurred from the second half of the 19th century onwards, often developed in conjunction with local surgeons. 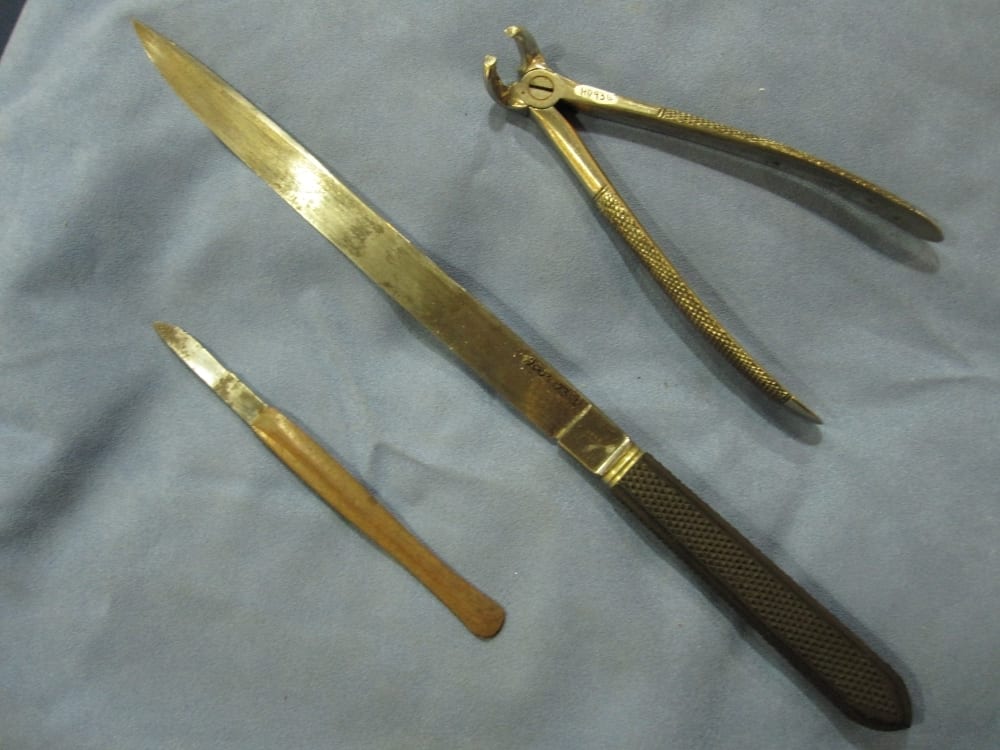 W.B. Hilliard and Sons were the largest surgical instrument maker in Glasgow during the 19th century. The firm was known for its fine workmanship and was awarded several medals and prizes in exhibitions in both Glasgow and London. Originally established in Buchanan Street in 1834, the firm subsequently moved to Renfield Street. The firm worked closely with local surgeons to perfect and introduce new instruments and also imported items from specialist manufacturers in Europe. By 1888 Hilliard and Sons was said to supply ‘with but few exceptions, all the principal infirmaries, asylums and institutions in Scotland with surgical instruments and fine steel goods’. In addition to surgical instruments the firm also patented and sold two different types of ice skate. 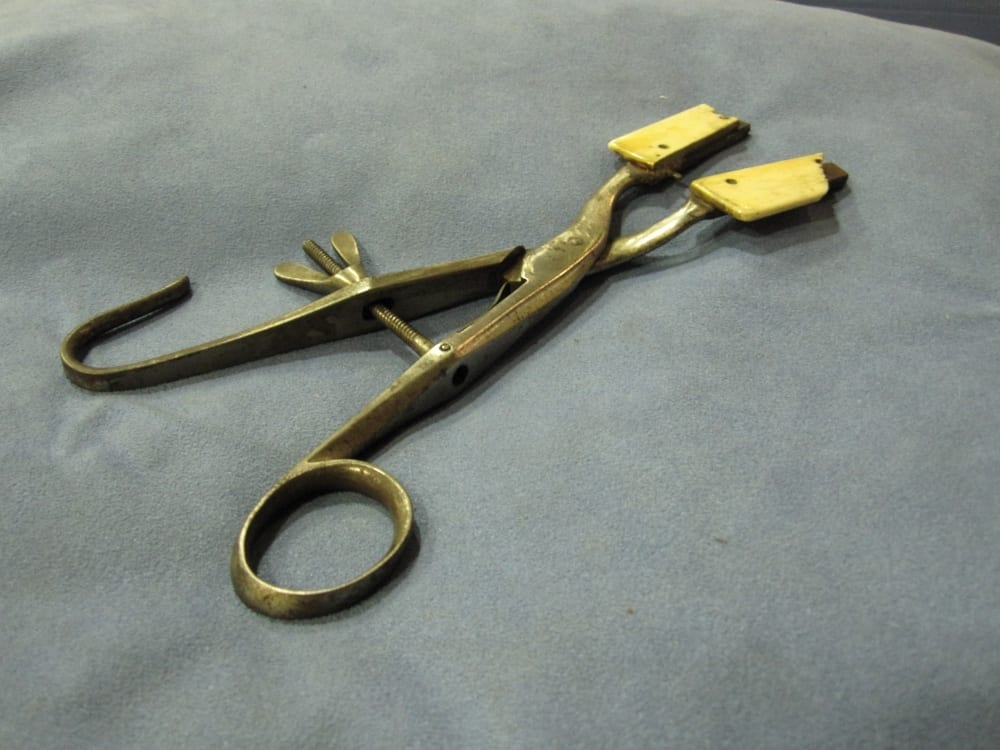 W.B. Hilliard took a keen interest in the development of surgical instruments and was keen to perfect the items he manufactured. He published a paper in the Glasgow Medical Journal in 1859 “On lithotomy instruments”.   The rectangular lithotomy staff had been developed for Dr Andrew Buchanan in 1846 (President of the Faculty of Physicians and Surgeons of Glasgow 1877-80). Hilliard considered the rectangular staff to be ‘the greatest improvement which has been made in lithotomy instruments since the use of a staff in the operation was first discovered’. In comparison to the previous curved version: ‘It affords the shortest route to the bladder; it gives ready and certain access to the knife; and offers no obstruction to the passage of the knife’. 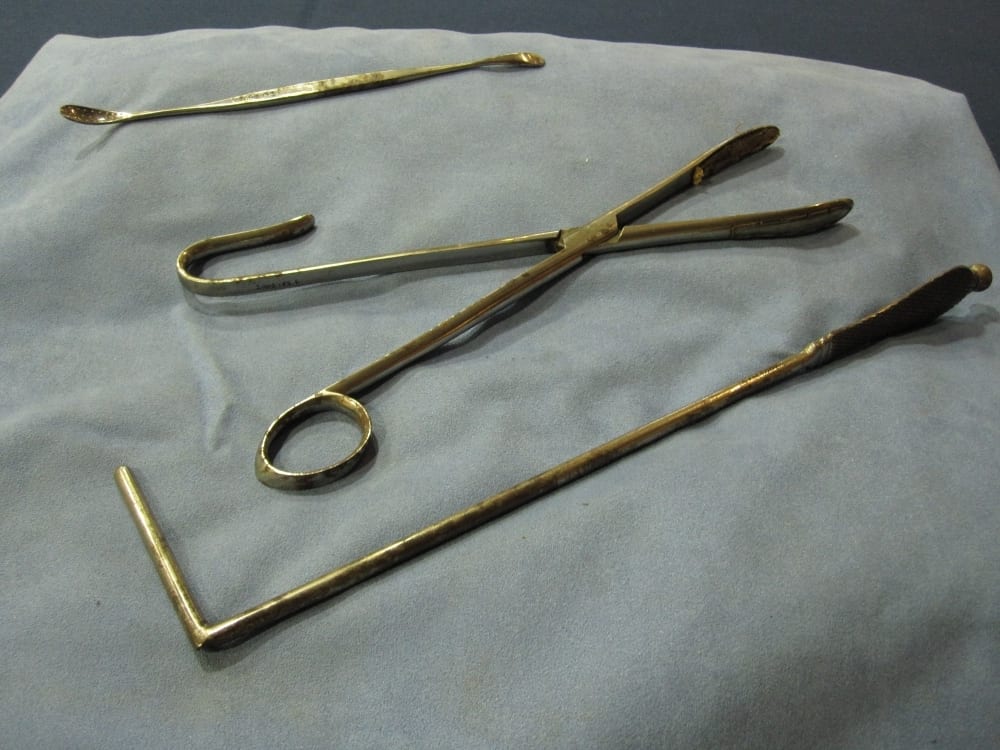 Part of a lithotomy set including rectangular staff by W.B. Hilliard and Sons

Hilliard also manufactured a form of lithotrite for crushing bladder stones in situ.  The lithotrite had been devised by French surgeon Jean Civiale (1792–1867) who, in 1832 performed transurethral lithotripsy, the first known minimally invasive surgery, to crush stones inside the bladder without having to open the abdomen (lithotomy). This particular lithotrite is an example of one developed by Scottish surgeon Sir William Fergusson (1808-77), Professor of Surgery at King’s College, London. The key is inserted into the main screw shaft to lock it. The set belonged to Sir George H.B. McLeod (1828-1892), Regius Professor of Surgery at the University of Glasgow, 1869-1892 who entered the Faculty of Physicians and Surgeons of Glasgow in 1858. 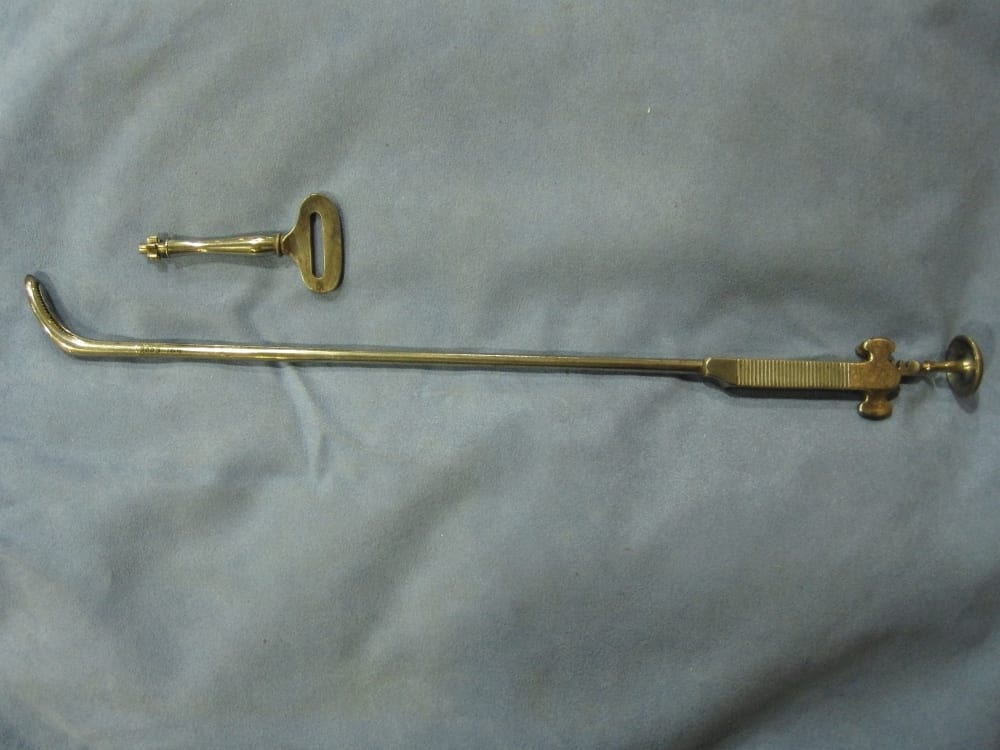 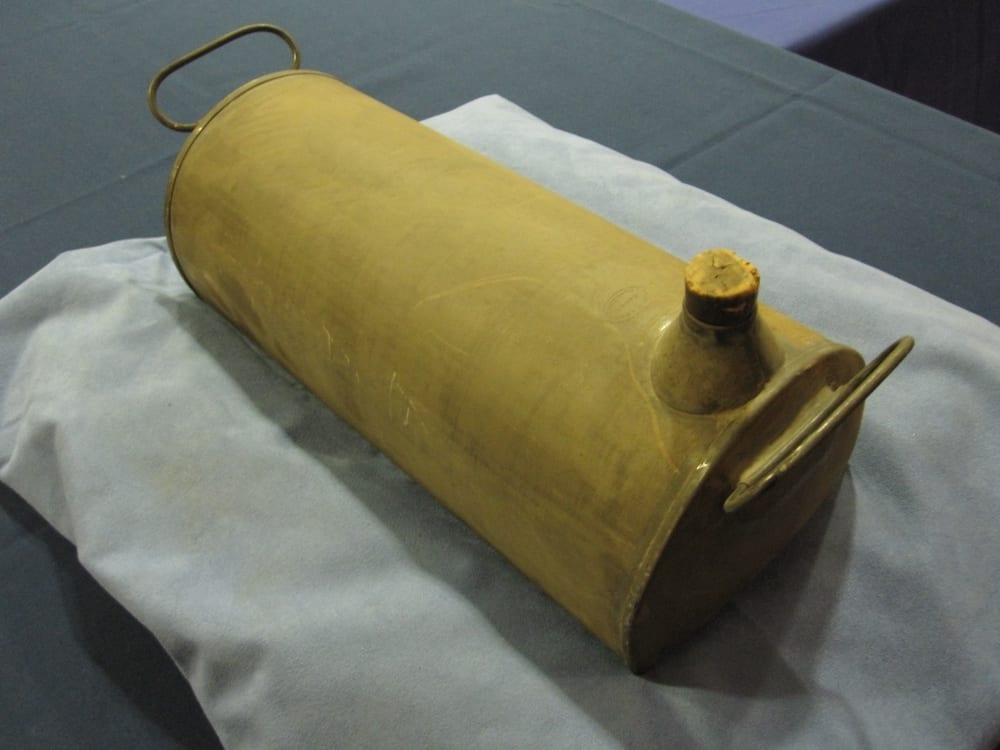 Optometrists Black and Lizars are celebrating their 185th anniversary this year.  John Lizars (1810-1879) set up shop as an optician in Glassford Street in 1830. By 1859 he was selling spectacles, eyeglasses, telescopes, microscopes, barometers, thermometers and a ‘great assortment’ of other items. 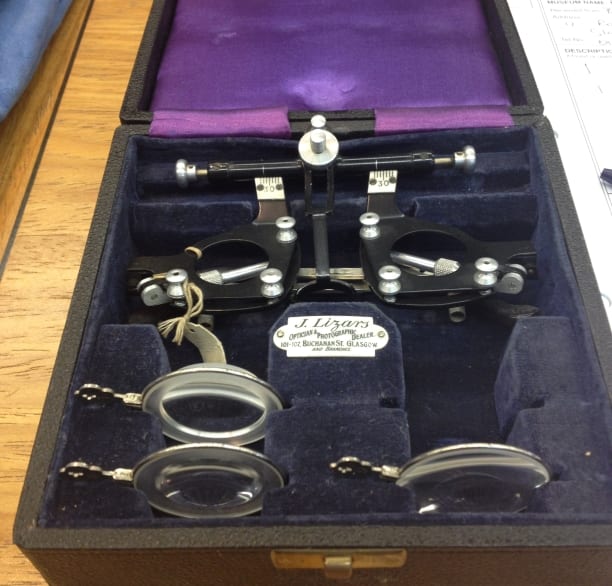 The firm was subsequently directed and expanded by Lizars’ son-in-law, Matthew Ballantine and his successors. In 1999 Lizars merged with C. Jeffrey Black to form Black & Lizars with a combined total of more than twenty branches mainly in the West of Scotland. Black & Lizars have kindly loaned glass eyes and sight testing equipment especially for our display. 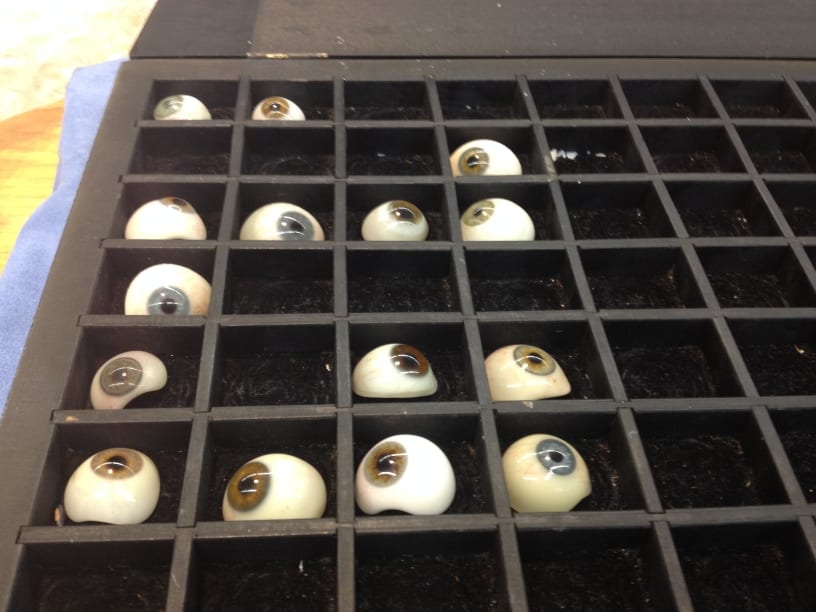 John Trotter set up business in Gordon Street, Glasgow in the 1880s with a branch opening in Edinburgh in the 1920s. Trotter was a pioneer in many branches of optical science and he also advised hospitals on the instillation of X-ray apparatus. 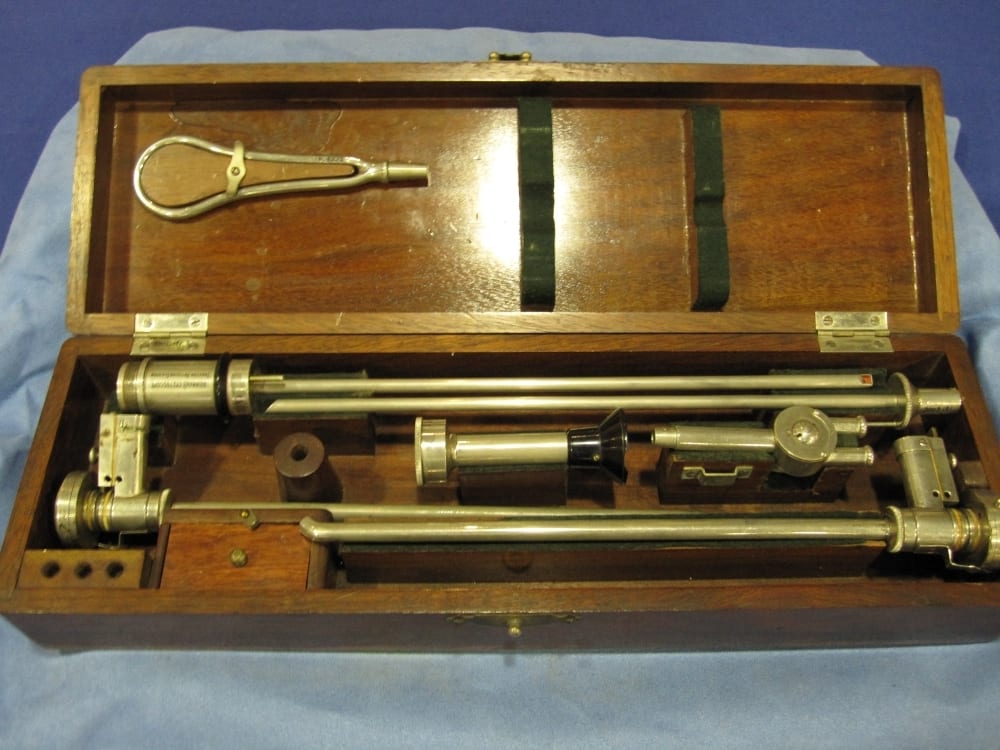 Newman’s cystoscope for examination of the bladder by John Trotter Ltd.

Ophthalmic surgeon Hugh Wright Thomson worked with Trotter to develop the skiascope which he used initially for eye examinations in school children although he subsequently also found it helpful for adults in hospital refraction work. A long stem was attached to its centre and the circular frame was fitted with twenty of the lenses most commonly used in retinoscopy (technique to objectively determine the refractive error of the eye – farsighted, nearsighted, astigmatism – and the need for glasses). 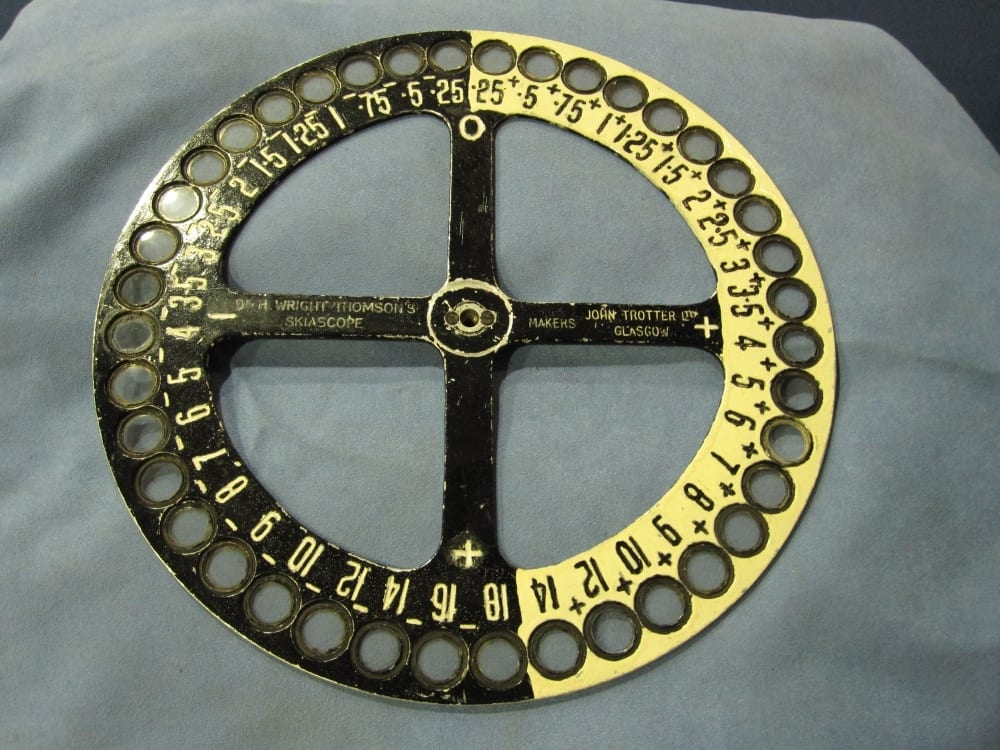 Trotter died in 1940, the firm continuing in operation until it was acquired by Black & Lizars in 2014.

For further information about any of the items described in this blog please email library@rcpsg.ac.uk