Maria Pepe Incerto, a distance learning student on the Master of Information Management course at Curtin University, Perth, Western Australia, undertook a three week work placement recently in the Library of the Royal College of Physicians and Surgeons of Glasgow.  Maria writes about her experience with us as follows:

While reviewing the collections for relevancy to the war I became familiar with their depth and breadth. They include the College’s administrative records, records of local medical societies, and personal papers.

The minutes of the College and some of the medical societies make reference to the war. For example, in response to the deaths on active duty of the sons of Fellows of the Faculty, the minutes (RCPSG 1) include expressions of condolence including one relating to the death of Captain James Maitland Downie (BA Cantab, MRCS Eng., LRCP Lond., Captain RAMC), the son of James Walker Downie who was President of the Faculty of Physicians and Surgeons from 1915-1916.

A different perspective can be found in the minutes of medical societies. The minutes of the Partick and District medical society (RCPSG 22/1) include details of the effects of war on local medical practice, such as the scarcity of doctors and the care of patients whose doctors are on active service; establishment of the Society’s War Emergency Committee; and contributions to war relief funds. The majority of societies, however, ceased to hold meetings (or held very few) during the war years.

The papers of Sir Ronald Ross (RCPSG 9) contains materials relating to his time in the War Office, where he made an important contribution to the prevention and treatment of tropical diseases, particularly malaria. Also in the papers is a poem “The fall of the zeppelin” (1916), which Ross was inspired to write after seeing a zeppelin brought down in London. 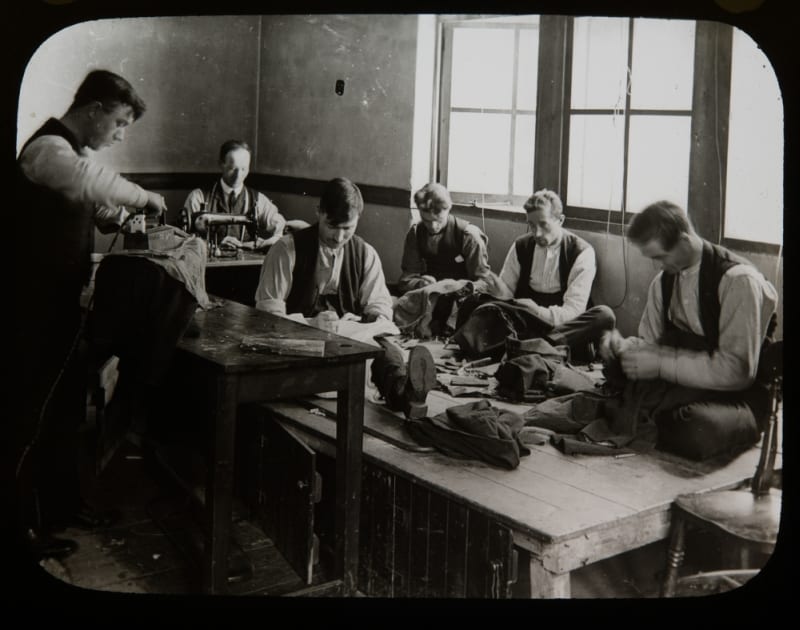 Shoemaking in one of the workshops in Princess Louise Hospital, Erskine (RCPSG 10)

The papers of Sir William Macewen (RCPSG 10) include correspondence regarding the establishment of the Princess Louise Scottish Hospital for Limbless Sailors and Soldiers, now known as Erskine as well as correspondence relating to Macewen’s time as Surgeon-General in Scotland for the Royal Navy. (For further information see our previous blog on Macewen’s war work).  Photographs relating to the First World War include those relating to Andrew Hutton (RCPSG 64) in Étaples and Arles, France in 1918. 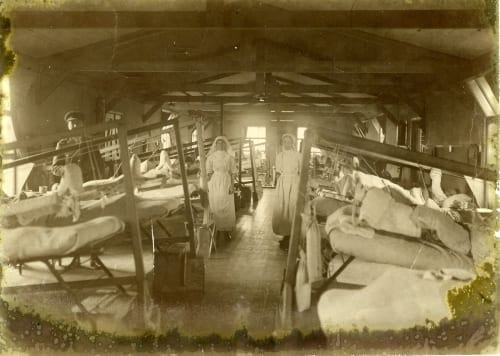 In addition to compiling the source list, I answered enquiries, and attended several Wednesday morning Coffee Conversations meetings hosted by the library. I was also fortunate to meet many of the library’s skilled and dedicated volunteers, who are involved in various aspects of cataloguing, conservation, transcription, and digitisation.

My thanks to the library staff who so generously and enthusiastically introduced me to the College’s remarkable collections, and to the College staff who were very welcoming.”