Joseph Heffernan, an arts undergraduate from the University of Glasgow, has been transcribing oral history recordings at the Royal College of Physicians and Surgeons of Glasgow under the University’s Club 21 work placement scheme.  He writes about the oral history project as follows:

This year, on the suggestion of the President, a project has taken place to increase the number of interviews held in the College’s oral history archive. Several senior fellows of the College, including a number of past presidents, have given of their time to discuss their lives and careers with Senior Fellow, Mr David Smith. Recordings of these interviews are to be stored in digital format and the interviews are also being carefully transcribed to provide readable copies for the use of those interested in the history of Glasgow medicine.

Of the interviews transcribed so far, all have provided a reminder of the scientific, political and social aspects of medicine. The interviews commonly begin with the interviewees describing their education and experiences as newly qualified doctors. The young lives of many of the doctors interviewed were notably punctuated by the experience of war. The recently passed anniversary of the D-Day landings coincided with Dr. Wallace Barr’s interview ,in which he spoke in detail about his role as a medical officer arriving on the beach shortly after the intense conflict. Dr. Barr recalled one unusual casualty he had encountered: “I remember seeing this chap was in obvious pain, I thought he had been struck, I was looking for some kind of evidence of this, and he was vomiting. So, I had a look at him and in fact I discovered he had acute appendicitis. I sent him back to this country with a label on him ‘immediate operation required’”. 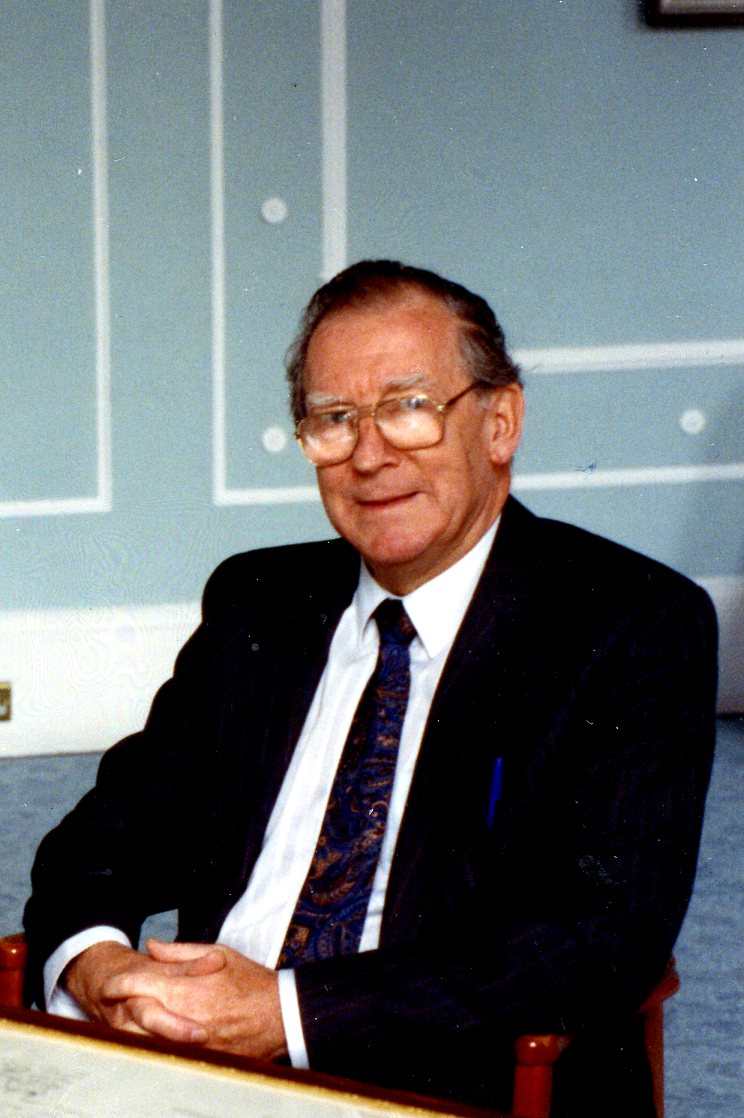 Dr Robert Hume when President of the Royal College of Physicians and Surgeons of Glasgow, 1992.

Dr Robert Hume described how his own first-hand experience of war had provided the impetus to pursue a career in medicine: “I could not understand what on earth was going on in this world. And having arrived in Germany, which was now shattered and battered, and nothing but rubble, places like Hamburg where only one building was standing that was occupiable, it just seemed to me that the world was a very sick and dire place. So, I decided that the world needed healing rather than lecturing to in Latin and Greek and I decided to apply for medicine”.

Other interviews placed a light on key developments in particular fields of twentieth-century medicine. Professor William Henry Reid for instance provided an in depth explanation of the role Glasgow doctors, especially Tom Gibson, played in the development of plastic surgery.The pleasures and pressures of holding important roles within the College, as well as the development of the Glasgow College itself, were also subjects explored by several of those interviewed.

Future generations will be able to draw on these interviews for research projects investigating the development of surgery and medical institutions in Glasgow over the past half a century, and for those simply aiming to gain an insight into what it was like to be a doctor in our age. For these purposes, the interviews are yet another priceless resource for the College archive.

If you would like to find out more about the oral history project please email: library@rcpsg.ac.uk