40 Years of the Glasgow Coma Scale

The 20th March has been designated as Head Injury Awareness Day in several countries, and the whole month of March is given over to Brain Injury Awareness Month in the USA. We decided that today would therefore be a particularly apt occasion to post about the upcoming 40th anniversary of the Glasgow Coma Scale.

The Glasgow Coma Scale (GCS) is a neurological scoring system which provides a reliable and objective way of measuring the conscious state of a patient. This allows practitioners to gauge the extent of an acute brain injury and the severity of a coma.  The scale was first published in The Lancet in 1974*, and is still taught to all new medical practitioners and frequently used in hospitals around the world. The GCS takes its name from the fact that it was developed by two researchers based at the University of Glasgow’s Institute of Neurological Sciences at Glasgow Southern General Hospital. Professor Sir Graham Teasdale and the late Professor Bryan Jennett are both hailed as world-renowned neurosurgeons. Each man also held the position of Professor of Neurosurgery at the University of Glasgow during the course of their long and  distinguished careers. Sir Graham Teasdale has a particularly close link to the Royal College of Physicians and Surgeons of Glasgow, as he served as President of the College from 2003 until 2006. His portrait can currently be seen in the College, hanging opposite the David Livingstone Room. 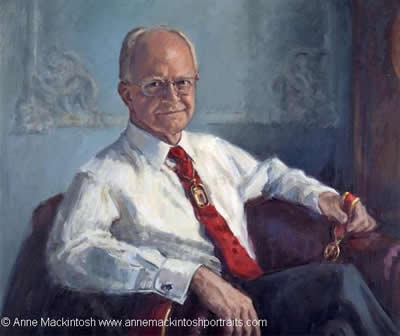 The GCS can be used to assess the level of consciousness in patients who have suffered a head injury, both in emergency trauma situations, and in chronic patients in intensive care. The scale includes three tests which are used to assess the patient’s eye, verbal and motor responses. For each of these elements, the patient is assigned a score ranging from 1 to 6, and the scores for the three elements are then considered separately and together. The final score for a patient can be as low as 3 (for deep coma or death) and as high as 15 (for patients who are fully conscious and awake).

The 1974 paper from The Lancet* has, over the course of the last 40 years, become a true citation classic in neurosurgery, with a greater number of citations than any other single publication in the field. The GCS is not without its critics, and some more recent researchers have suggested alternatives to the GCS, including tests such as the Simplified Motor Score and the FOUR Score. None of these scales, however, have been successful in gaining the universal consensus of the original, and the GCS remains the default method for assessing consciousness in almost every hospital and medical school in the world. Even actors in medical dramas on TV can often be heard delivering lines such as, “the patient has a GCS of 9” (indicating a moderate to severe brain injury).

The enduring popularity of the GCS makes its development one of Glasgow’s greatest contributions to the world of medicine. To mark the 40th anniversary of the Glasgow Coma Scale, Professor Sir Graham Teasdale will speak as part of the History of Medicine seminar at the College’s Triennial Conference in June. The conference is titled Advancing Excellence in Healthcare and will take place at Glasgow’s SECC on the 19th and 20th of June. More information about the conference, including details of the History of Medicine programme, can be found at http://aeh2014.rcp.sg.