During the 18th century French surgery led the way in dental techniques, exemplified in the work of Pierre Fauchard.  His two volume work, Le Chirurgien Dentiste, ou traité des dents was first published in 1728 and was followed in 1746 by an enlarged second edition.   This work was a compilation of all known knowledge in the field of dentistry and contains a good description of pyorrhoea alveolaris. A digitised version of this work can be viewed on the website of the Bibliothèque Nationale de France.  However, if you require some help with French, the College library possesses a translation of the work by Dr Lilian Lindsay published in 1946 (see the library catalogue).  Fauchard devoted many pages  to the extraction of the teeth, with instruments very similar to those used by the 16th century surgeon Amboise Paré.  In contrast to his predecessors he described in detail the process and techniques of dental prosthetics, the best material for these being human teeth, ivory, hippopotamus bone and walrus tusks.

This openness by Fauchard in publishing dental knowledge initiated works by subsequent French authors revealing knowledge and techniques which, up to this date, had been carefully guarded.  The influence of the works of these French surgeon dentists quickly spread to France’s European neighbours, particularly to Germany and, rather more slowly, to Britain.

It would be in London, however, that a highly important contribution to anatomy would appear in the 18th century. 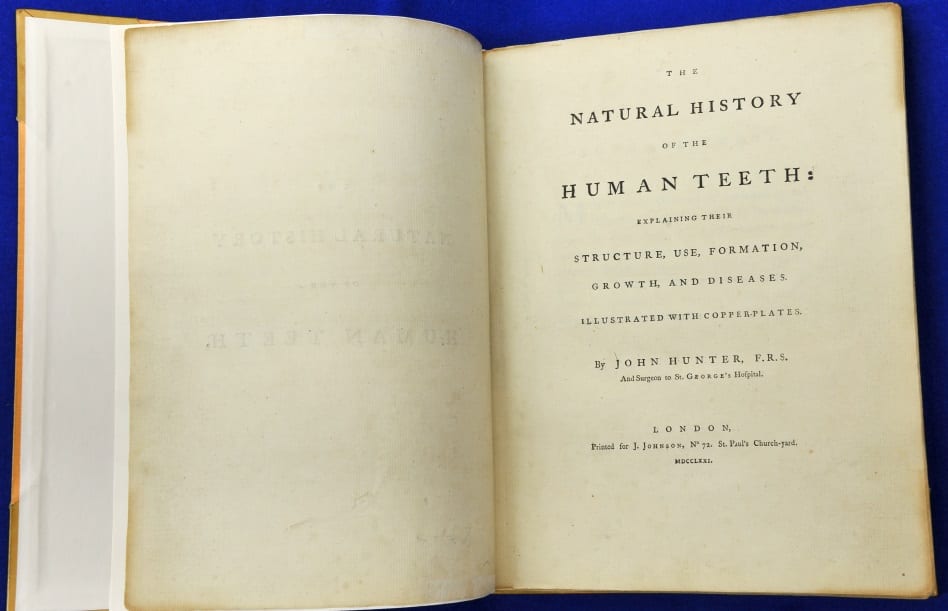 Natural History of the Human Teeth by John Hunter, 1771

This was John Hunter’s The Natural History of the Human Teeth.  Published in 1771, it was this work that really made Hunter’s name by creating a modern anatomy of the teeth and jaws.  Hunter took a stand against the old concept of constant growth in teeth and explained the apparent increase in width as a consequence of tooth migration.  The growth of the mandible in relation to the teeth is demonstrated very clearly through four jaw specimens of different ages side by side. 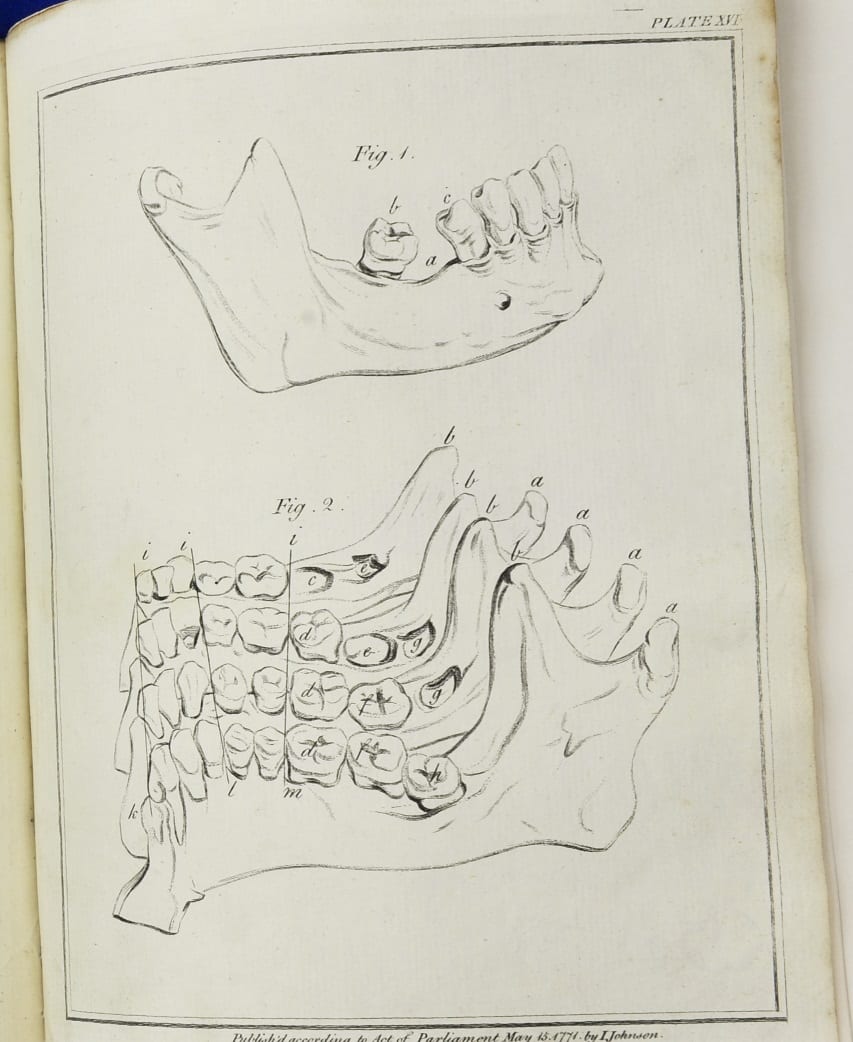 Illustration from Hunter’s work of 1771 showing growth of the mandible.

Hunter subsequently published a further work Practical Treatise on the Diseases of the Teeth in 1778.  He was at that time a general surgeon and had to obtain his specialised knowledge from the London dentist James Spence.  A great deal of space is taken in this latter work in the transplantation of teeth from one person to another; still a customary procedure at that time.

It would be Joseph Fox, one of Hunter’s pupils,  who produced what is considered to be the first work on orthodontics, The Natural History of the Human Teeth, published in 1803. 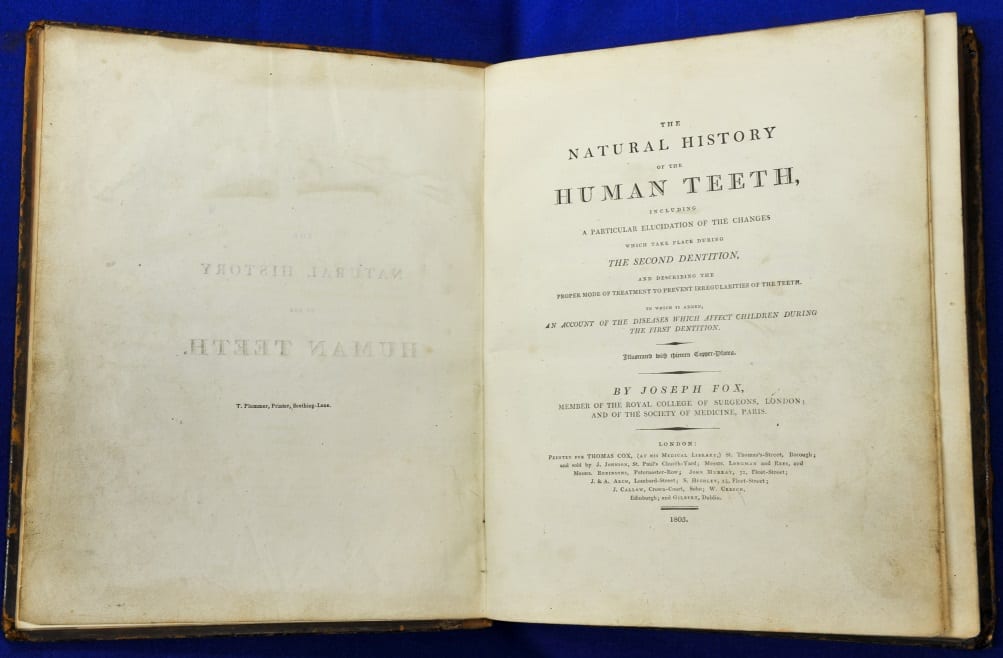 The Natural History of the Human Teeth by Joseph Fox, 1803

The work included explicit directions for correcting dental irregularities.  Fox was the first dental surgeon appointed at Guy’s Hospital in London in 1799. His lectures on dentistry and orthodontics influenced a generation of dentists in the early 19th century, and his works were republished frequently up to the 1850s. 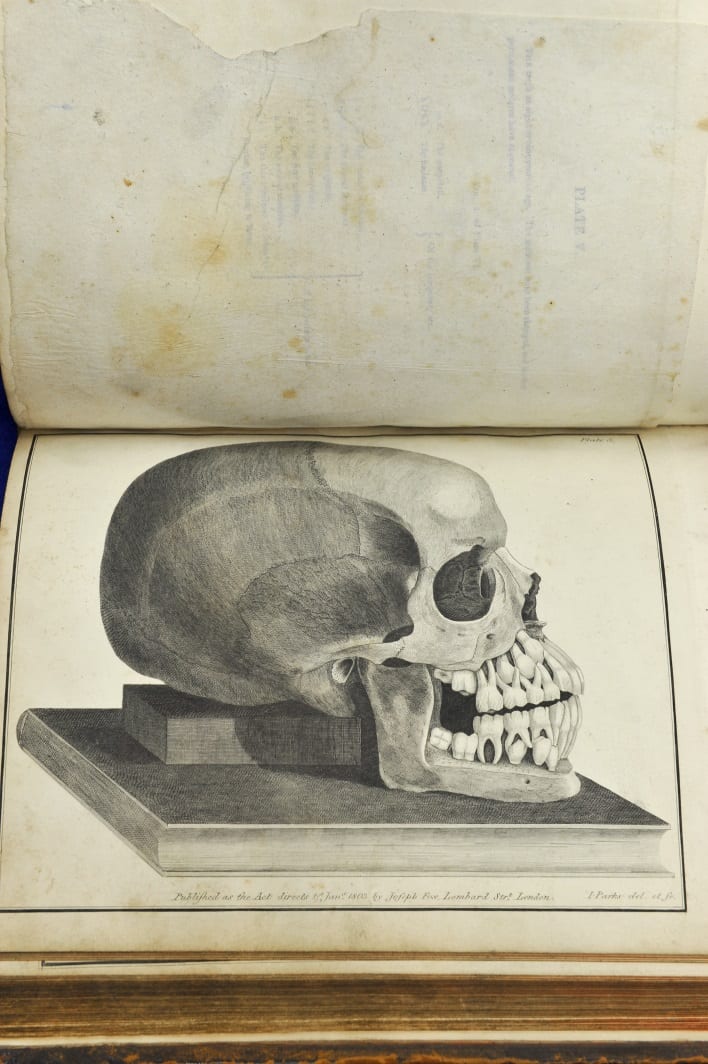 Plate from Joseph Fox’s Natural History of the Human Teeth, 1803

Please get in touch with the library should you wish to view books mentioned in this blog by emailing library@rcpsg.ac.uk

For more details about the library holdings of the Royal College of Physicians and Surgeons of Glasgow see the library catalogue.

For our previous blogs on dental history see Renaissance Dentistry and Dental instruments of the late 18th/early 19th centuries.