This is the second blog about some of the dentistry items we have in the historical collections at the Royal College of Physicians and Surgeons of Glasgow.  The first blog, published in November 2013 was on the topic of Renaissance Dentistry.

Today I will be exploring some of the implements used for tooth extraction in the 18th and 19th centuries. One of our main sources for this is Savigny’s catalogue of instruments published in 1798. This work, entitled A Collection of Engravings Representing the most modern and approved instruments used in the practice of surgery is the first illustrated British catalogue of surgical instruments.  In his introduction, Savigny laments that in nearly twenty years as a workman there were not engravings and explanations of such items, particularly in consequence of the “rapid and astonishing improvements” of recent years.  He notes the publication of two others on the Continent, namely Brambilla at Vienna and Peret at Paris.  The book consists of engraved plates of instruments, largely reproduced in life size along with an accompanying text describing the items. The work provides a wealth of information about the surgical instruments in use during this period.

During the late 18th century/early 19th century the most frequently used instrument for extraction was the toothkey. 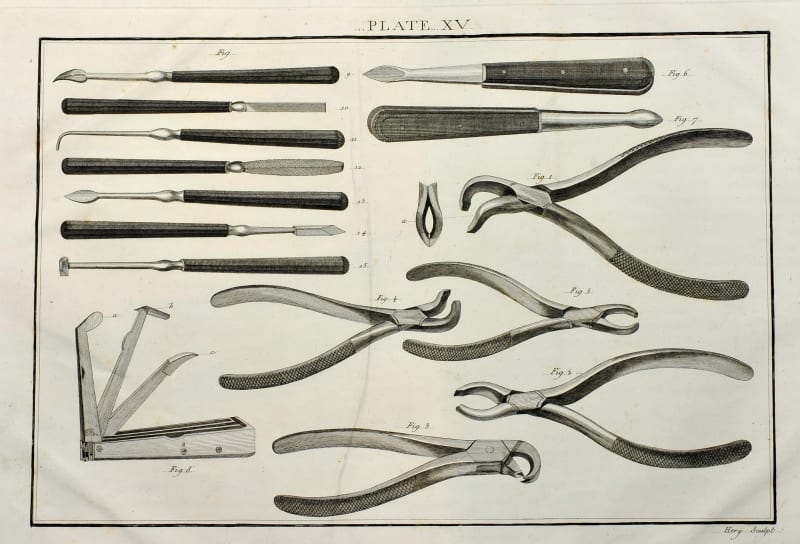 Several forms of toothkey are illustrated on the right hand side of Plate XIV (above). The third item down on the right hand side is an older version of the toothkey with a straight stem and bolster.  The instrument in this form was first  mentioned in 1742.  Above it is an example of an improved instrument which came into use by 1770 with a curve at its extremity to aid extraction.   Savigny himself invented a modification to the key and this is illustrated on the bottom right of the plate. He writes “on comparing and reflecting on the various forms which the key instrument has received, I have ever found their principal defect to arise from the depth of the bolster, which, even in the smallest, describes in its action so large a circle as to occasion unavoidable inconvenience; and in the larger, or deeper ones, certain danger of fracturing the alveolar process, and of being followed by consequences always painful and frequently dangerous”.  Savigny’s design of bolster was intended to raise the offending tooth in a nearly perpendicular direction and thus lessen the chances of bruising or laceration. 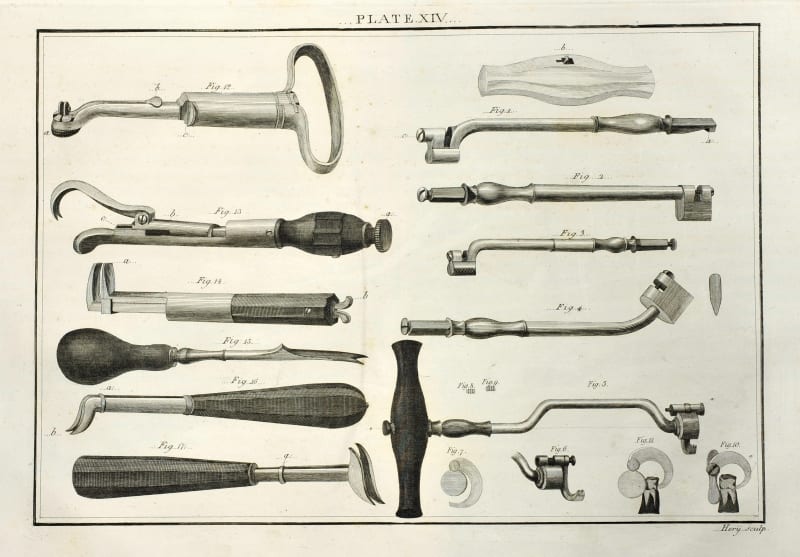 Plate XV illustrates instruments for scaling and cleaning the teeth (left hand side), two levers for forcing out stumps (top right hand side), various forceps or paces used for extracting the stump or removing the tooth after it had been disengaged from its socket by the toothkey.  The forceps at the bottom of the plate, termed Front or Hawk’s-bill Paces, was used in a similar way to the pelican to extract the incisors.  A set of gum lancets is illustrated on the bottom left hand side of the plate.  These were used to detach the gum from the tooth before extraction.

If you are interested in viewing Savigny’s catalogue or any of the items mentioned in our blog posts then please get in contact with the library to arrange an appointment email: library@rcpsg.ac.uk