In my previous blog about midwifery, there is an illustration of the title page of Elizabeth Nihell’s work on midwifery dating from 1760.  Elizabeth Nihell wrote against the use of obstetric instruments used by man-midwives such as William Smellie: “the surgeons, in the form of men-midwives, have been the death of more children, with their speculum matricis, their crotchets, their extractors or forceps, their tire-têtes, &c. than they have preserved. . . . This fatal operation by instruments might even be pronounced absolutely useless in the profession.  There is no inveighing severely enough against so dangerous a doctrine as that which recommends them” (Nihell, 1760, 54).   William Smellie, in fact was quite cautious about the use of instruments and tended only to use them when absolutely necessary.  Born at Lesmahagow near Lanark in 1697, Smellie was one of the leading man-midwives of his day.  Following apprenticeship as a surgeon, he entered the Faculty (now Royal College) of Physicians and Surgeons of Glasgow in around 1732-33 (we don’t know the exact date as the minute book was destroyed in a fire).   Like many Scottish-trained doctors he travelled to London to seek fame and fortune.  Smellie devised an improvement to obstetric forceps for delivery and also devised a ‘phantom’ or ‘manikin’ to assist in the teaching of midwifery to male students.

Savigny’s catalogue of surgical instruments published in 1798 contains several illustrations of the types of instruments used by man-midwives during the late 18th century. 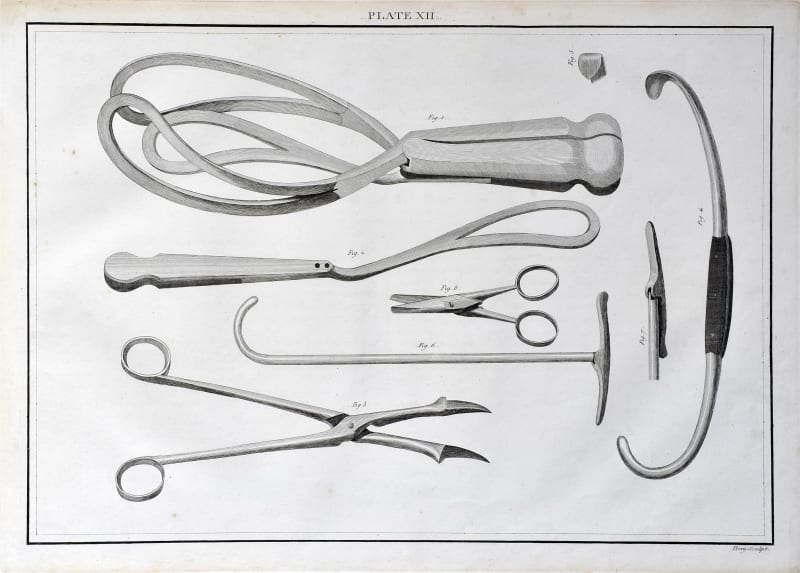 The instruments include a crochet and blunt hook united (right hand side), a pair of perforators for penetrating and opening the cranium of the foetus (bottom) and, directly above these, an instrument known as a tire-tête.  These were used in the delivery of dead baby by collapsing its head, thus reducing its circumference so that it could be pulled out using the hook. 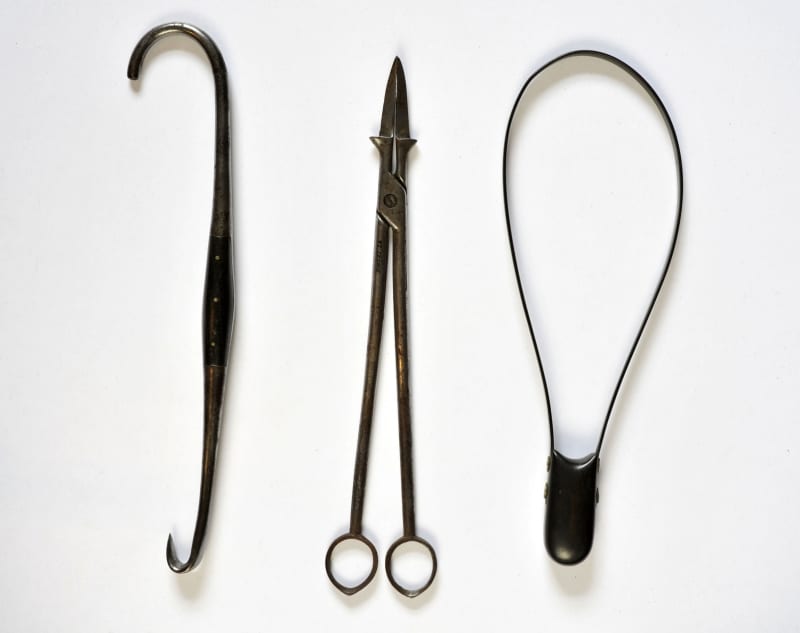 Midwifery instruments in the instrument collection of the Royal College of Physicians and Surgeons of Glasgow.

The illustration above shows a crochet and blunt hook united, and a perforator very similar to those illustrated in Savigny’s catalogue.  The instrument on the right is a fillet or lack made out of whalebone with a wooden handle.  Smellie, in his work A Treatise on the Theory and Practice of Midwifery, 1779, considered the fillet to be “the most useful of all … contrivances” in delivery apart from the forceps, the main disadvantage being in “introducing and fixing them” (Smellie, 1799, 218-219).

Smellie’s works, including his magnificently illustrated Anatomical Tables, published in 1792 can be seen in the College Library.  For further information please email: library@rcpsg.ac.uk