Rebecca Thorogood was born on the 23 August 1843 in London.  She married and had a daughter before the age of 20.  Very little is known about her husband apart from his surname, Strong, and the fact that he died within a couple of years of marriage and was buried in Liverpool.

Widowed at a very young age, Rebecca Strong decided to go into nursing and was accepted as a probationer at the Nightingale Training School which had started in 1860 at St Thomas’ Hospital in London.  In 1868, following her training, she gained nursing experience at Winchester and at the British Army hospital at Netley, being appointed matron of the Dundee Royal Infirmary, in 1874.  At Dundee, Rebecca Strong was able to introduce new nursing practices (see the Dundee Women’s trail for further information about her time in Dundee).

In 1879 Mrs Strong was appointed matron at Glasgow Royal Infirmary, the largest voluntary hospital in Scotland.  Attracted by the challenge, when she arrived in Glasgow she was shocked to find how backward the Infirmary appeared in relation to its nurses.  She devoted her energies to improving nurse education and training and working conditions. 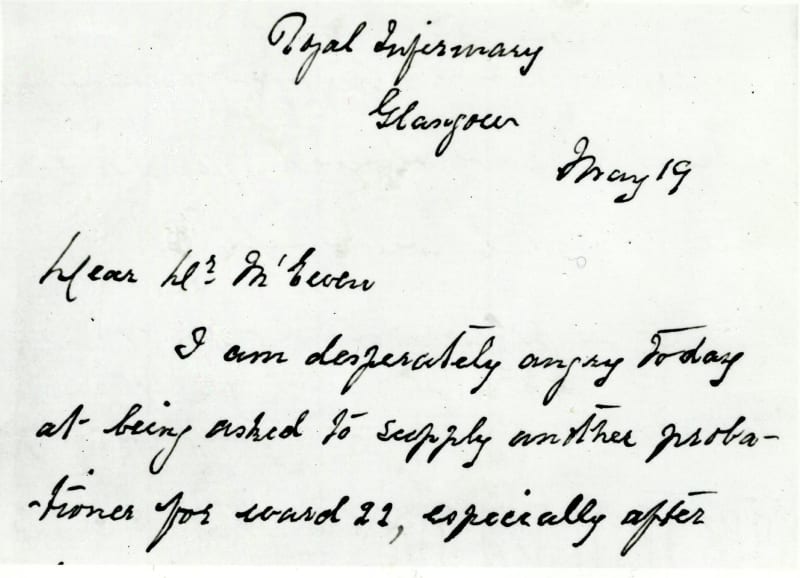 Letters from Rebecca Strong can be found in the papers of Sir William Macewen in the College archives.  The relationship between the two could at times be stormy but they greatly respected one another.

In January 1891, Macewen gave an address at Glasgow Royal Infirmary on the subject of “Nurses and Nursing”.  A copy of the address is in the College archive (RCPSG 10/1A/129/11).  In the lecture he said “Cannot nursing be raised to a distinct profession, with its entrance examination, its minimum requirements, theoretical and practical, its teachers, its examiners and its diploma?”  He also felt that  nursing was specially suited for women: “Nursing is, beyond all cavil, a sphere for women’s work; indeed man can scarcely enter there . . . one can scarcely expect a man to be a nurse, as his instincts and training do not suit him for it . . .  A woman possesses such a magnificent compass of susceptibilities, is so full of human sympathies and soft compassions, if her life is not to be a barren wilderness she requires opportunities to enable these to expand”.

With the support of Macewen, Rebecca Strong initiated the ‘block apprenticeship’ training programme, later adopted world-wide.  Short periods of instruction in the hospital school was followed by periods of practice on the wards.  This was a great improvement on previous nurse instruction whereby nurses were expected to attend lectures and study while still working long hours on the wards.  The pioneer Preliminary Training School was opened in January 1893 under an arrangement between Glasgow Royal Infirmary and St Mungo’s Medical College. 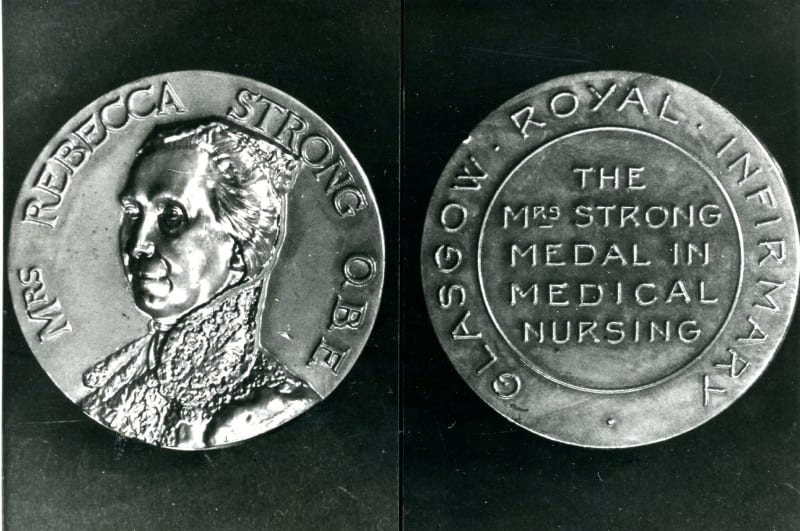 In 1942 the Macewen medal in surgical nursing and the Mrs Strong medal in medical nursing were established at Glasgow Royal Infirmary to commemorate the pioneer work of Macewen and Strong in elevating nursing to the status of a profession.

Rebecca Strong was a strong supporter of State Registration for nurses which eventually happened in 1919.  She also worked for the improvement of the social life of nurses and was the moving spirit, along with Sir William Macewen, in the opening of a club for them in Glasgow in 1918.  In 1939, at the age of 95, she was awarded the O.B.E.  and celebrated her 100th Birthday on 23 August 1943.  She died almost exactly a year later, on 24 April 1944.

For those wishing to find out more about the early years of nursing, digitised copies of the The Nursing Record/British Journal of Nursing can also be found on the Royal College of Nursing website.