This year’s Goodall Symposium was held in College on the 6th June 2013 on the topic of transplantation.  Its lively title ‘From corneas to kidneys: organ transplantation, its history, ethics and art’ attracted an audience of 70 people, all keen to hear about different aspects of human tissue transplantation. For the first time, the Goodall Symposium has been part of the Glasgow Science Festival and we welcomed many new people to the College as a consequence.

The evening commenced with a thought-provoking lecture on the ethics of transplantation by Stephen Wigmore,  Professor of Transplantation Surgery and Honorary Consultant Surgeon at Edinburgh Royal Infirmary.  Professor Wigmore presented real cases that had occurred along with the ethical issues – when was it right to remove organs, could there be stipulations made by the family etc.  At the end of the lecture I was immensely reassured by how carefully surgeons assess each case.  Professor Wigmore’s presentation is now available online.

Dr Maureen Park, Senior Lecturer in the History of Art at the University of Glasgow gave a totally different aspect on transplantation when she discussed ‘The Fine Art of Transplantation’.  Her lecture encompassed medieval art with several depictions of Saints Cosmas and Damien miraculously transplanting  the (black) leg of a Moor onto a (white) body – apparently without any blood at all. The lecture included the impact of war on facial reconstruction and concluded with the arresting works of modern artist John Bellany and transplant surgeon Sir Roy Calne who had operated on Bellany.

Our final speaker was retired transplant surgeon Mr David Hamilton, author of the recently published A History of Organ Transplantation: Ancient Legends to Modern Practice (see Library catalogue).   Mr Hamilton concentrated on the Glasgow story of transplantation including the work of ophthalmologist John Reissberg Wolfe and Professor Tom Gibson who, in 1943, in conjunction with later Nobel prizewinner Peter Medawar, published the groundbreaking article  ‘The fate of skin homografts in man’, in the Journal of Anatomy.  This article placed the laws of transplantation on a firm scientific basis. 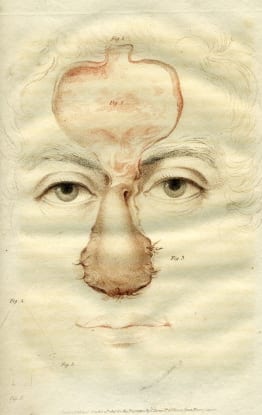 Ancient Indian method of restoring a lost nose from Carpue, 1816

As ever, we placed items of interest to the symposium out on display in Crush Hall for visitors to view while enjoying drinks and a buffet.  These included a cardiac bioptone of the type developed by Professor Philip Caves at Stanford Medical School USA in the 1970s to diagnose heart rejection and Joseph Carpue’s work An account of two successful operations for restoring a lost nose, published in 1816 (see Library catalogue).